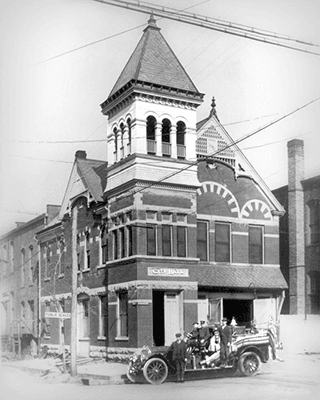 In 1811, the Tennessee State Legislature appointed a committee to select a new site for the Rutherford County seat. The site eventually chosen was 60 acres of land belonging to Captain William Lytle.

The General Assembly named the new town Cannonsburgh, honoring Newton Cannon, a young politician in Williamson County, but upon Captain Lytle's request, changed the name to Murfreesboro one month later. The naming was in memory of Lytle's friend, Colonel Hardy Murfree. In 1817, Murfreesboro was recognized as an official city by the State Legislature and, in 1818, was named the capital of Tennessee because of its central location. However, Nashville regained the title as the state capital in 1826.

In the early years of Murfreesboro, it was mainly an agricultural community, with corn, cotton, and tobacco being the main crops. By 1853, the Murfreesboro area was home to three colleges and several academies, prompting it to be called the "Athens of Tennessee" by a visiting religious reporter. Although education suffered from the military occupation and the trauma of the Civil War, by the early 1900's it began to regain momentum.

After WWII, Murfreesboro and Rutherford County began to change from an agricultural based economy to industrial and manufacturing. Industrial growth has been steady since that time, contributing to a stable economy and phenomenal growth. In the past decade, Murfreesboro has enjoyed substantial residential and commercial growth. The city's population has increased 53.2% from 44,922 in 1990 to 68,816 in 2000. In 2017, Murfreesboro now has a population of more than 130,000.

Most Livable Town In Tennessee

Named the Most Livable Town in Tennessee, Murfreesboro is the 10th fastest-growing city, for communities over 50,000 in population, in the United States and it's not hard to see why. Murfreesboro provides the quality of life that attracts growth:
City Council
Agenda Center
Jobs
Online Payments
Maps
Permits
Public Transit
Parks and Rec
Police
Water Resources
Stay Connected
Videos
Next Previous
/QuickLinks.aspx
Government Websites by CivicPlus®
[]