Where We Live - The Central Basin

We are fortunate to live in one of the most ecologically diverse states in the United States. Murfreesboro is nestled in the dead center of Tennessee in the physiographic region known as the Central Basin, and more specifically, the Inner (or Nashville) Basin. The ecology of the Inner Basin is informed by what lies beneath: The rocks below our feet that, along with environmental factors, determine the plant communities that have developed here. The plant communities, in turn, determine which wildlife species find the habitat suitable for year-round residence, breeding, overwintering, just passing through - or not at all.

Murfreesboro itself is dotted with wetlands, riparian areas, and other mesic areas - including along the West, Middle, and East Forks of the Stones River - and numerous springs, tributaries, and underground streams. Limestone glades, large and small, are also numerous within the city limits and the surrounding area. Historically, barrens (small areas of grassland with shallow soils and few trees) and savanna (larger grasslands with scattered trees and deeper soils) predominated. Fire suppression over the past two centuries has led to woody vegetation growing up in these areas.

The Central Basin is an enclosed, depression that curves down into the bare flat limestone outcroppings of the Inner Basin and is surrounded by the Highland Rim. The Outer Basin is a unique transitional area that features characteristics of both the Highland Rim and the Inner Basin, including oak-hickory forest systems and karst sinkholes and caves. Beginning in the Ordovician period, roughly 450 million years ago, lateral movements of the earth’s crust (known as orogenic movements) caused pressure to develop that gradually lifted the sedimentary rock structures into a dome and fractured the layers of shale, chert, limestone, and sandstone that had been deposited over time. The eventual erosion of the upper layer of sedimentary rocks exposed the limestone bedrock underneath, after which the soluble nature of limestone caused erosion to occur at a quicker rate. The flat exposed limestone outcroppings associated with cedar glades, the movement of water along cracks in the limestone forming caves and sinkholes, and the bedrock that is exposed along the streams and rivers of this area are all a result of these geologic events over millions of years. (Reference: The Geological History of Tennessee by Robert A. Miller)

Murfreesboro sits in the middle of it all. 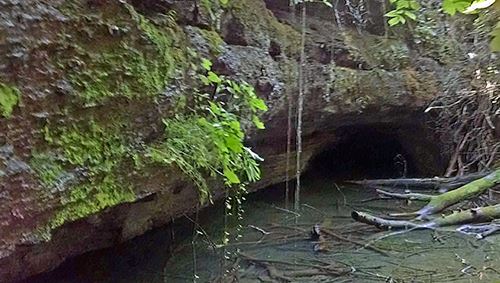 A karst system or topography is defined by the dissolution of limestone over time by slightly acidic water that creates underground fissures, caves, sinking creeks, sinkholes, and/or springs. Under Murfreesboro is a system of moving water, caves, and other karst features that results in an interesting study of water movement, sinkhole development, and specialized flora and fauna. The movement of water through these systems is much like a plumbing system, whereby water moves through cracks and seams like pipes and is deposited into large caves or caverns. A strong, mature and intact system does a good job of mitigating flooding, filtering water, and slowing the powerful force that is fast-moving water. (Reference: MTSU’S Center for Cedar Glade Studies)

Plant community makeup fluctuates in response to climatic factors and periodic disturbances, such as floods, drought, and wildfire. Over time, if undisturbed, the plant community in any one place will gradually transition into the "climax community" for that site based on geology, soils, climate, and aspect - though, even a "climax community" is never static. Early successional stages - those that come in after a disturbance - tend to be the most productive and support the greatest variety of wildlife.  Different successional stages in plant communities favor different wildlife species, and maintaining a healthy mix is essential to supporting a wide variety of fauna.

Current research indicates that Murfreesboro was historically a part of a limestone oak savanna system. Whereas forests consist of several layers (herbaceous, shrub, understory, and canopy), savannas are described as open grasslands with scattered trees. Increased forestation in these areas is likely the result of many years of fire suppression. Historical survey records and the study of plants found in open fields suggest that Murfreesboro and the surrounding Inner Basin counties were likely home to extensive oak savanna systems. The dominant tree of this system is the post oak. (Reference: The Southeastern Grasslands Initiative)

This type of vegetation, with scattered individual and clumps of trees, occasional shrubs, and open areas supporting diverse populations of grasses and forbs, provides a variety of food sources and cover options and is choice habitat for many wildlife species.

Here in the Central Basin, we are fortunate to have an abundance of one of the most globally-rare and unique ecotypes: limestone glades. Characterized by extreme conditions, thin soil, and exposed limestone pavement, the plant species that live in limestone glades have adapted to very hot, exposed conditions in summer and very cold, exposed conditions in winter. Fluctuations in moisture are also extreme: During the rainy season, many portions of glades may be in standing water for long periods of time, while in the dry season, water is nowhere to be found. Conditions in these areas are so challenging that many of the plant species that have adapted to the limestone glades of the Central Basin are endemic to them (found nowhere else on Earth). With such a restricted range, many of our endemic plants are also globally threatened or endangered though they may be locally abundant.

Limestone glades are often edged by eastern red cedar stands and thickets that can include other species of trees like post oaks, locust, some maples, and other tree species that can exist in these conditions. In the absence of occasional fires to keep them in check, some of these woody species will encroach on the glade ecosystems, changing the micro-environment and crowding or shading out the glade-adapted species.

Wetlands are among the most productive ecosystems in the world, comparable to rain forests and coral reefs. They support a a wide variety of aquatic, semi-aquatic, and terrestrial wildlife, and well as breeding and migratory birds. They also retain and filter stormwater, removing pollutants, sediment, and excess nutrients carried in by runoff and improving water quality as it passes through them into groundwater, streams, and rivers. Murfree Springs Wetlands, an in-town natural space you can view from its extensive boardwalk system, is a prime example - but there are many wetland areas in Murfreesboro. In fact, the city's site was specifically chosen because of the abundant water in the area.

Heading toward the Murfreesboro city limits, especially to the west and south, rolling hills begin to change the landscape. In these areas, oak-hickory forests begins to take shape, the most prevalent forest type found in Tennessee. This forest community, dominated by assorted hickories  and a variety of white and red oak species, and containing diverse plant and animal life, can grow in the relatively dry soils and stone outcroppings of the hilly slopes moving up the Outer Basin as well as in the wetter soils along riverbanks and low-lying areas in the foothills. Interestingly, Tennessee's dominant forest type was historically oak-chestnut, but with the arrival of the chestnut blight and the decline of the American chestnut tree, hickories filled in the ecological niche.

Much as the underlying geology dictates which plant species can grow in an area, the type of plant communities in an area influence the wildlife species that live there. These relationships developed over eons.

Middle Tennessee fauna, like its plant life, is known for its diversity and unusually high numbers of endemic (found nowhere else) and/or rare species. Glades and caves host many of the rarest species, globally speaking, since these ecosystems are rare themselves world-wide. We are also fortunate to share our open spaces with numerous species that are more ubiquitous: white-tailed deer, river otters (above), bullfrogs, opossum, great blue herons, red-wing blackbirds, northern cardinals, common garter snakes, opossums, wood ducks, and wild turkeys are among the many species commonly spotted in and around Murfreesboro.

What truly makes Murfreesboro unique can be found at the confluence of rock, water, and plant. Everything comes together to create systems that are globally rare or endangered - and that contribute to the character and health of our community. An intact, functional, and diverse ecosystem benefits ALL of life: Clean water, clean air, food, good soil, temperature regulation - and an energy that is healing and nourishing for us all.