The Community Development Block Grant (CDBG) program was enacted into law as part of the Housing and Community Development Act of 1974. It is a formula-allocated program that provides grants to eligible grantees, meaning cities with populations over 50,000 people, urban counties with more than 200,000 people, and states (states are responsible for administering the program for small cities, rural counties, and unincorporated jurisdictions). 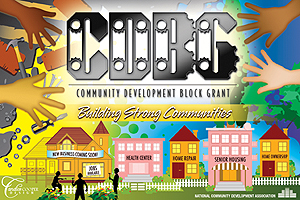 To this day, CDBG remains the principal source of revenue for localities to utilize in devising flexible and comprehensive neighborhood strategies to prevent physical, economic, and social deterioration in lower-income neighborhoods and communities throughout the nation.

Murfreesboro became a CDBG entitlement city in 1984. The city’s block grant is administered by the Community Development Department. View the accomplishments you have helped reach since 1984:

In the 2018-2019 program year, Murfreesboro is receiving a CDBG grant of $805,736. Your Community Development Department leverages your federal money with state and local resources, both public and private, to stretch the available funding to cover more programs, more projects, and more people than ever before.

In addition, for the 2018-2019 program year, 13 organizations and agencies are receiving Public Service Grants totaling $132,224